Jim was one of Shetland’s leading citizens of all time. He was most famous for his inventions including the first fish gutting machine, for which he received the MBE for service to the fishing industry. He built two aeroplanes at Berry Farm and flew them both, gaining his pilot’s licence. He also invented a turnip harvester and various other agricultural implements, and was a brilliant and respected breeder of Shetland ponies.

Despite his exceptional skills, Jim remained a modest, humble person who left an indelible mark on all who met him. He was renowned for his charm and humour.

The Smith family started the firm of J&S in the 1930s. They began buying and handling wool at Berry Farm before moving to Lerwick to the current premises in the 1950s. With the exception of a break for the war years, where Jim saw action with the R.A.F in the Far East, he spent most of his life involved in running their farms at Scalloway, Unst ( Uyea Isle ) and Pitmedden Farm, Aberdeenshire, as well as their other businesses – the Scalloway Meat Company, Shetland Marts (where he was a partner) and J & S.

Jim and Eva’s ownership of J & S was extremely hands on. Their direct involvement helped to create one of the leading textile companies of its era. Jim’s experience of grading and sorting Real Shetland Wool was passed on directly to myself and the staff at Jamieson & Smith. The same business ethos is carried on to this day. This ethos is based on a profound respect for our suppliers and their wool. Jim’s diverse skills are apparent all through J&S, even in the very fabric of our buildings – he took on much of the building work including site clearance, steel works, and concrete flooring for the middle wool store.

In the 80s and 90s, when wool markets were at low ebb, Jim and Eva continued to invest in J&S. As the main wool buyers for the islands, this support was crucial for Shetland’s wool producers.

One could fill pages with stories of Jim’s involvement in J&S – perhaps another time. It is important to note that Jim and Eva still retained an active interest in J&S, despite the company changing ownership in 2005. In fact, just last tuesday – two days before his passing  – Jim  was enquiring into things at Jamieson & Smith and sharing his advice and experience.

We take this opportunity to pass on our sincere condolences to Eva, not only from the staff past and present but also on behalf of all our suppliers, customers and clients. 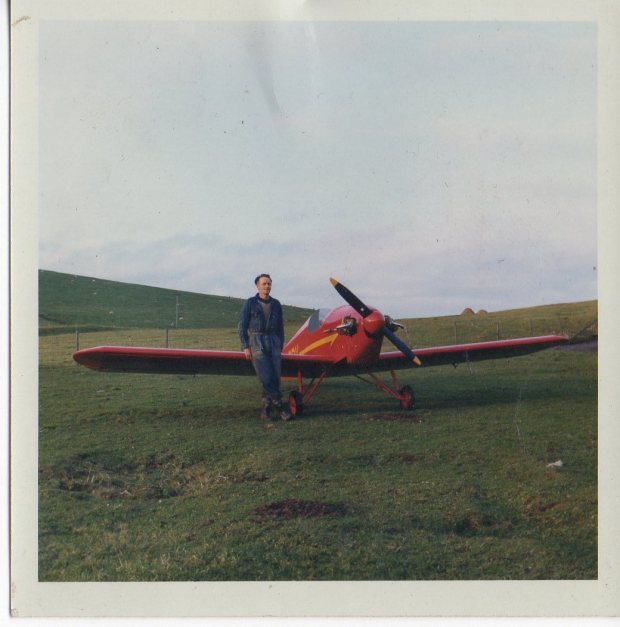 Image: Jim Smith o’ Berry with one of the planes he built c.1964