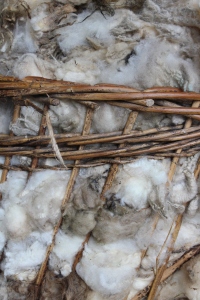 Thank you all for the great feedback from the past few posts. Before we get into the actual yarns we produce I have one more post about the wool that goes into our yarns, back to Oliver.. 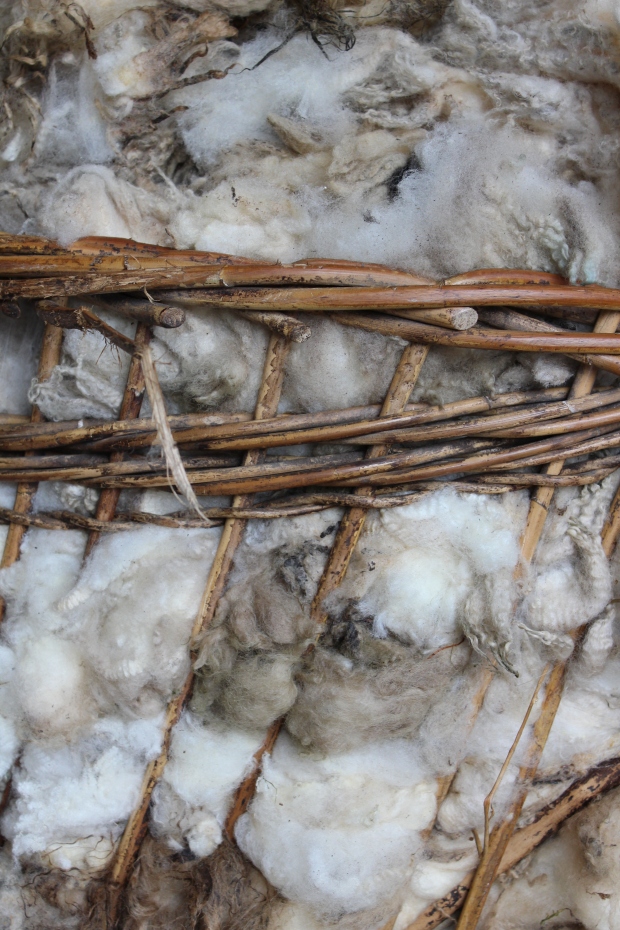 To understand the first part of processing the fleece, we have to look to the wool quality and go back to the first report on Shetland sheep and its wool. As we talked about in another post the report by John Shirieff compiled in the 1790s, states there are two distinct breeds in the Islands. The ‘Kindly’ wool sheep with a very fine fleece and a the coarser wool sheep ‘although some of its fleece be fine , it is of a quality unfit for any general purpose of manufacture, some of it is as shaggy as a Welsh goat’ The kindly wool was much sought after in order to hand spin and knit into fine lace shawls, stoles etc. The coarser wool was of little use, some of it was used for the ‘grund’ the base of a ‘Tattit’ rug, which was constructed by the crofter and used as a bed covering, later on it was used on the floor as a mat. It is interesting to note that the  ‘Tattit’ rug collection some over 100 years shows little or no wear, meaning it was ideal for a floor covering, Shetland’s Tattit Rug collection will be the focus of a major exhibition at the Shetland Museum from the 23rd of May – 19th July.

Shetland sheep genetics ensure that these two distinct breeds survive to this day, through the centuries they cross bred between the two, so you can have both wool types in one fleece.  Superfine wool at the neck and shoulder through to the much coarser guard hairs toward the hips, which forms the britch. Some of the older crofters maintained that even the finest wool sheep should have a heavy britch in order to protect it when it was lying down amongst the coarse springy heather. 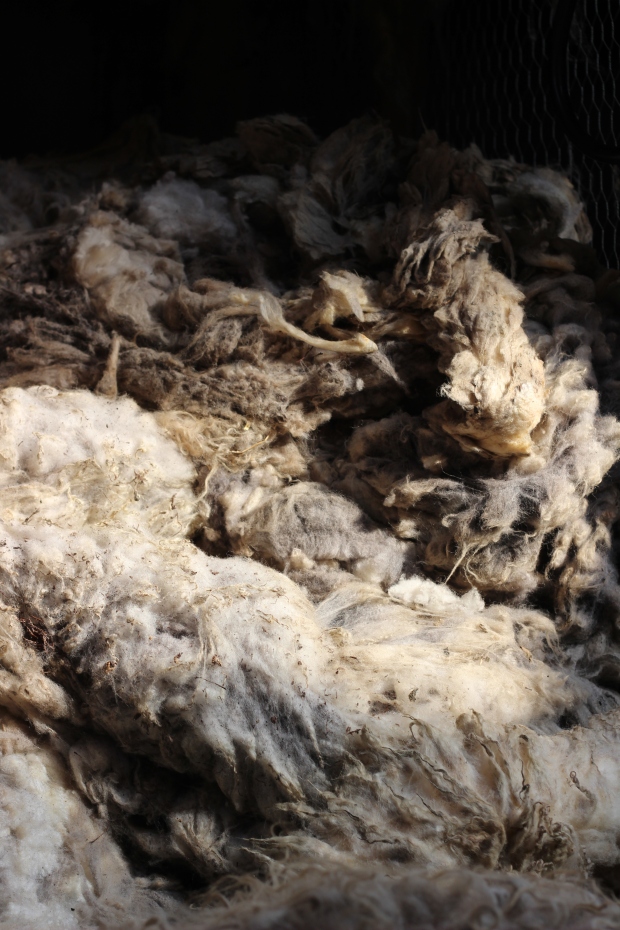 Shetland Fleeces waiting to be sorted in our Woolstore

After we have graded the wool into five grades selecting the fleece by style ‘crimp’ uniformity of quality, strength, springiness and handle – softness and of course fibre fineness. Next step is hand sorting of the fleece  which means the coarser guard hairs are separated from the finer fibre. If  the guard hair is not separated at this stage you will end up with a coarser itchy yarn.

The diameter of the wool fibre influences to a large extent the use to which the wool can be put and also the length of yarn that can be spun from a given weight of wool. Users and manufacturers normally use a series of quality numbers to indicate fibre fineness.

These numbers in ascending order of fineness, are 28s ( the thickest, coarser fibres)32s,36s,49s,44s,46s,48s,50s,56s,58s60s,64s,70s,90s,100s ( the  very thinnest, finest fibres.) Most British wools are within the range 28s to 58s. An average Shetland fleece is around 56s/ 58s . Quality numbers are not based on any particular unit of measurement, they are standards handed down from generation to generation of woolmen and can be learned only by practical experience and handling of wools.

This is the measurement of the unstretched staple from tip to base. The figures quoted are the standards for each grade.

The softness or harshness of the wool when handled.

This refers to the amount of gloss or sheen visible on the fibres. Degree of lustre varies greatly between different types. A bright lustre is an asset for certain manufacturing processes.

The nearness of the wool to white (or black in the case of black fleeces.).

The ability of the staple to resist breaking during manufacture. The word ‘sound’ is used to describe wool of satisfactory strength rather than ‘strong’ which, in wool terminology, refers to thick or coarse fibres. The opposite to a sound wool is a ‘tender’ wool. Tender wools may have a break in all the fibres at one point in the staple as a result of illness or drought. 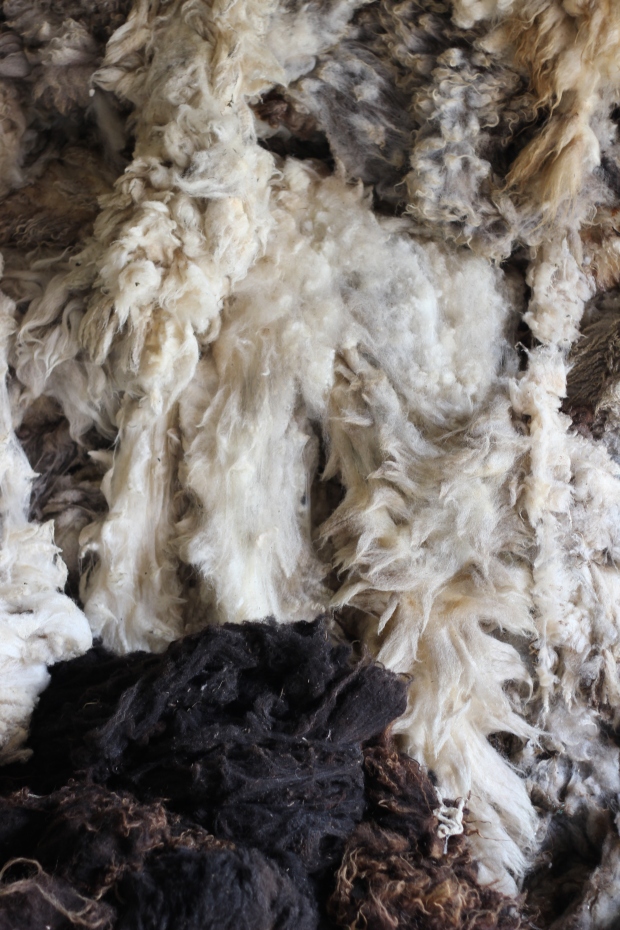 The presence of grey or black fibres in a fleece restricts its dyeing range to the darker shades. This fault occurs in many of the white- woolled breeds.

A brittle white fibre, shed during the growth of the fleece, which is extremely difficult to dye. In Welsh wool red kemp is often found.

A term applied to wool which contains up to 6% soil, peat moor, or sand due to the sheep having been run on arable crops or peat moors.

A term applied to wool which contains over 6 % of soil or sand.

This refers to wool from a sheep that is first shorn as a yearling.

Refers to wool from the second and subsequent shearing’s.

The amount of clean, dry wool remaining after the dirt and grease in the fleece has been scoured away commercially.

raw wool bales being shipped away for processing, a common sight at J&S during the Summer months.

The wool process begins with shearing which takes place once a year usually during the early summer. Once the sheep has been shorn the wool is taken to us at Jamieson & Smith, then graded and sorted as described earlier. The wool is then shipped away to be processed and dyed on the mainland, something we have always done. Originally at Hunters of Brora and now via our parent company, Curtis Wool Direct.

After grading and sorting the wool is then passed through the scouring and washing plant, where five different washes remove the natural grease and other foreign matter. A by- product of scoured wool is Lanolin which is extracted from the grease and is used in the manufacture of fine soaps and cosmetics.

Carding is the next stage. The object of carding is to separate and straighten the long fibres whilst eliminating vegetable matters such as heather, peat lumps etc. The carding machine produces a continuous ribbon of loose fibres approximately the thickness of one’s wrist, known as carded silver.

At this stage you can choose two different avenues of spinning, they are the worsted and the woollen process. To deal with the former first the wool goes through a stage called combing. The worsted process uses only the long fibres, the carded silver is combed to separate the long fibres from the short (noil ). After combing the fibres run parallel with each other to form a combed top in preparation for spinning. Dyeing is often done at this stage. 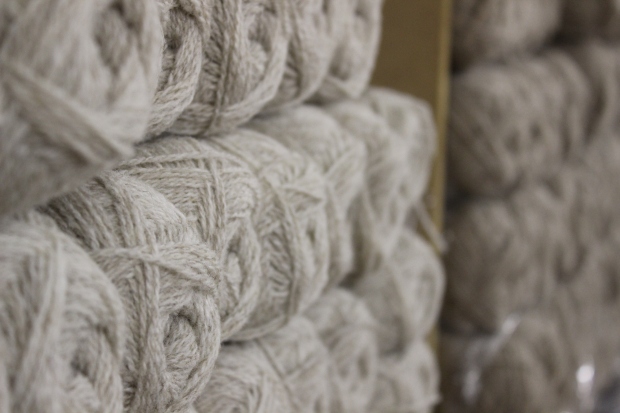 In the next post I will start with our most famous yarn, 2ply Jumper Weight! so look out for that next week,

happy knitting and have a good weekend! x